42 players turned up for this annual event on the Melbourne Chess Club Calendar, this time with the list headed by two interstate visitors, GM Zong Yuan Zhao & IM Max Illingworth, both from Sydney. Although most of the higher rated players won their early rounds, they were not without their upsets, with Matthew Clarke holding Calvin Bennett to a draw in round 1, while in round 2 Kris Chan beat Richard Voon, Chloe Chin beat Vishal Bhat & Andrew Thornton held Tristan Krstevski to a draw.
Round 3 saw the first big boil over of the tournament, with MCC favourite David 'Firegoat' Beaumont beating IM Max Illingworth in a game that David described as his best played game of all time! Also in round 3, young Kris Chan held Dusan Stojic to a draw. Round 4 saw no major upsets, but a number of draws, including Dusan Stojic holding top seed Zong Yuan Zhao to a draw in the last game of the round to finish, as well as Ray Yang drawing with Franz Oswald, along with a few more closely matched contests.
The final day saw most of the top seeds winning in the morning round, although Tony Davis managed to beat Dusan Stojic, Ray Yang beat Tristan Krstevski & Andrew Thornton beat Ben Frayle. The Chan brothers continued their impressive tournaments with draws against Calvin Bennett (Kris) & Will Bakanursky (Luis). The final round saw the tournament finish in a four-way tie, with Justin Tan & Zong Yuan Zhao drawing on top board, with Max Illingworth & Tony Davis winning their final games to join them on 5/6. Kris Chan finished off a good tournament with a win over Gary Bekker, Chris Chin beat Calvin Bennett & Dominic Lai beat Rebecca Strickland in final round upsets, while Will Bakanursky was lucky to escape with a draw against Ray Yang.
Full results & prizewinners are listed on ChessChat. 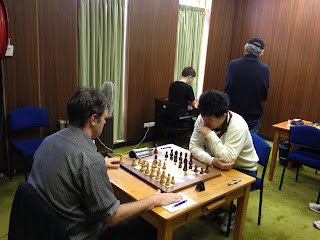 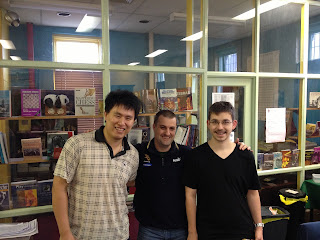 David described this win as his best ever, so I thought it might be worth including on the blog!