The second day of the Noble Park Classic was full of exciting chess, with a number of games going right down to the wire! Ultimately it was local favourite, Domagoj Dragicevic, who is the club treasurer, who was triumphant, scoring an undefeated 6.5/7 to win the tournament!
As had become usual in this event, round 5 saw a number of upsets, with Svetosar Stojic beating John Nemeth, John Ni beating Kyle Gibson, Carl Loucas beating Tanya Kolak, Rebecca Strickland beating Jamie Yung, as well as a large number of draws. At the top of the tournament, Justin Tan took the outright lead after beating Mirko Rujevic, while both James Morris & Domagoj Dragicevic were half a point behind after wins over Christopher Wallis & Dusan Stojic respectively. Round 6 also saw some upsets, with Marko Grabovac beating Ethan Lim, Vishal Bhat beating Jason Chew, Milan Stojic beating Tanya Krstevska, Rebecca Strickland beating Carl Dingfelder, as well as another quota of draws. The top of the tournament saw another change, with Domagoj Dragicevic assuming the lead after beating Justin Tan. The chasing pack grew larger after Mirko Rujevic beat James Morris and Miodrag Milojevic beat John Ni to join Justin on 5/6.
The final round saw Domgoj Dragicevic playing Mirko Rujevic for first place, while Justin Tan & Miodrag Milojevic fought it out for second (and a possible share of first). The top board clash went the distance, with Mirko seeming to have the better of a double rook endgame, until Domagoj managed to turn the tables in mutual time trouble. Mirko's once-active king went passive, while Domagoj's king came to life & within an instant Mirko found himself faced with the prospect of losing a rook, or seeing Domagoj have an extra queen, and resigned shortly afterwards, to make Domagoj Dragicevic the winner of the inaugural Noble Park Classic. Justin Tan won his game to take second place, while Carl Gorka beat Jack Puccini to secure third place. On the other boards there were the usual share of upsets, with Tom Lea beating John Nemeth, Kris Chan beating Joseph Wong, Regan Crowley beating Gary Lin, Ryan Kam beating Milic Sucevic, Alanna Chew Lee beating Tanya Kolak, Haran Salasan beating Tristan Krstevski, as well as a few draws.

I've also included a few photos from the final day:

Top board action in round 5, with spectators gathering towards the end of the round 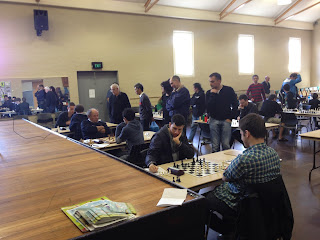 The intra-club battle, with the club President playing the Treasurer ... with the club Tournament director & equipment officer interested onlookers in the post-mortem 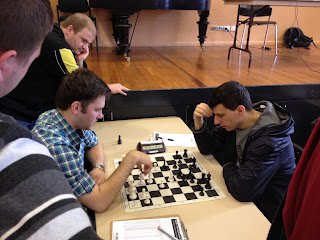 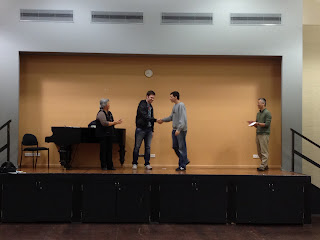 Final results are available on ChessChat.

Prizewinners were as follows:

Although I was able to put a number of games into the computer over the weekend, Phillip Drew also helped input games & his collection of games will be available as a PGN at some stage in the future, most likely on the Noble Park Website.

To finish off my coverage of the tournament, I'll show two very different games from round 5.

The first game is an example of what can go wrong in the Sicilian Defense, with Svetosar Stojic producing a miniature against John Nemeth.

The second is James Morris' grinding win over Christopher Wallis where the momentum swung a number of times before Morris brought home the point in a tricky queen ending, most of which was played with less than a minute on the clock each!