59 players made the trek to Noble Park for the inaugural Noble Park Classic.
Noble Park Chess Club has only started in the last few years & in this time its gone a long way to establishing itself as one of the top chess clubs in Melbourne (and arguably in the top 3 in Melbourne!), and a weekender seemed like the next logical step for the club.
The tournament itself is very strong, with 2 IMs, 3 FMs & 11 players rated above 2000ACF! The early rounds also saw a few upsets, with Vishal Bhat beating Marcus Raine in round 1, while Carl Dingfelder held Sylvester Urban to a draw. Round 2 saw more upsets, with Jason Chew beating Miodrag Milosevic,  Khadem Jahid beating Thai Ly, Haran Salasan beating Jaime Yung & Lachlan Martin beating Denise Lim. Round 3 saw some normality return, with the only upset being a draw between Rad Chmiel & Milic Sucevic.
Round 4 saw two leaders emerge from the pack, with Mirko Rujevic beating Dusan Stojic, while Justin Tan beat Chris Wallis. The upsets returned though, with Anurag Sannidhanam beating Marcus Raine, John Ni beating Rad Chmiel, Cameron Yung beating Bosko Mijatovic, Vishal Bhat beating Jamie Yung & Ryan Kam beating Jamie Kenmure.
Tomorrow's first round sees Justin Tan & Mirko Rujevic battle it out for the lead, with plenty of chasers hot on their heels!
There is DGT coverage of the top board (thanks to Phillip Drew), which can be seen on the Noble Park website.
Results & pairings can be found on ChessChat.

Below are a few photos of the tournament hall with the round underway. 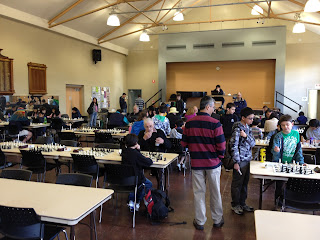 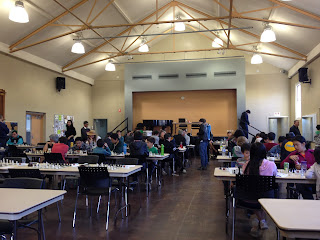 I also noticed an interesting piece of public art not too far from the tournament hall ... 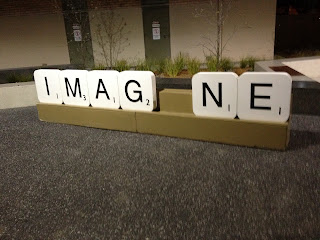 To wrap up day 1, here is the round 3 clash between Ari Dale & Domagoj Dragicevic, which saw the momentum change a number of times, before Domagoj finally managed to find a way to break through Ari's defenses!