2014 was another year of growth in school chess in Victoria, as evidenced by the recently held state finals, which I was one of the arbiters for.
The finals started with the Secondary Open finals at Brighton Grammar. Melbourne High were once again the winning school, but the margin was much closer than it has been in recent years. Kai Jee Soo from Box Hill High was the only player to finish on 7/7 for the day & took out the individual honours.
Full results are on the Chess Victoria website. 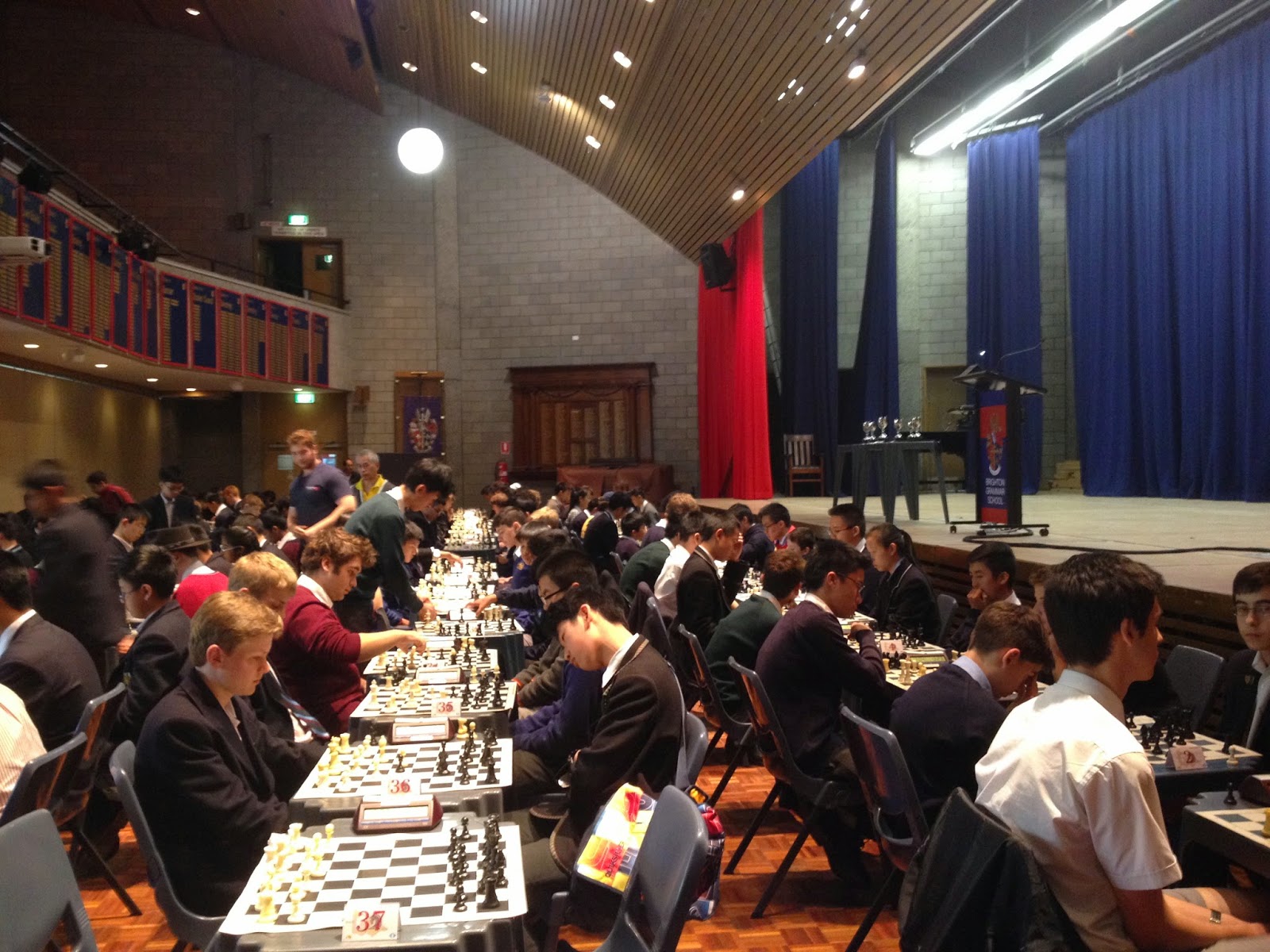 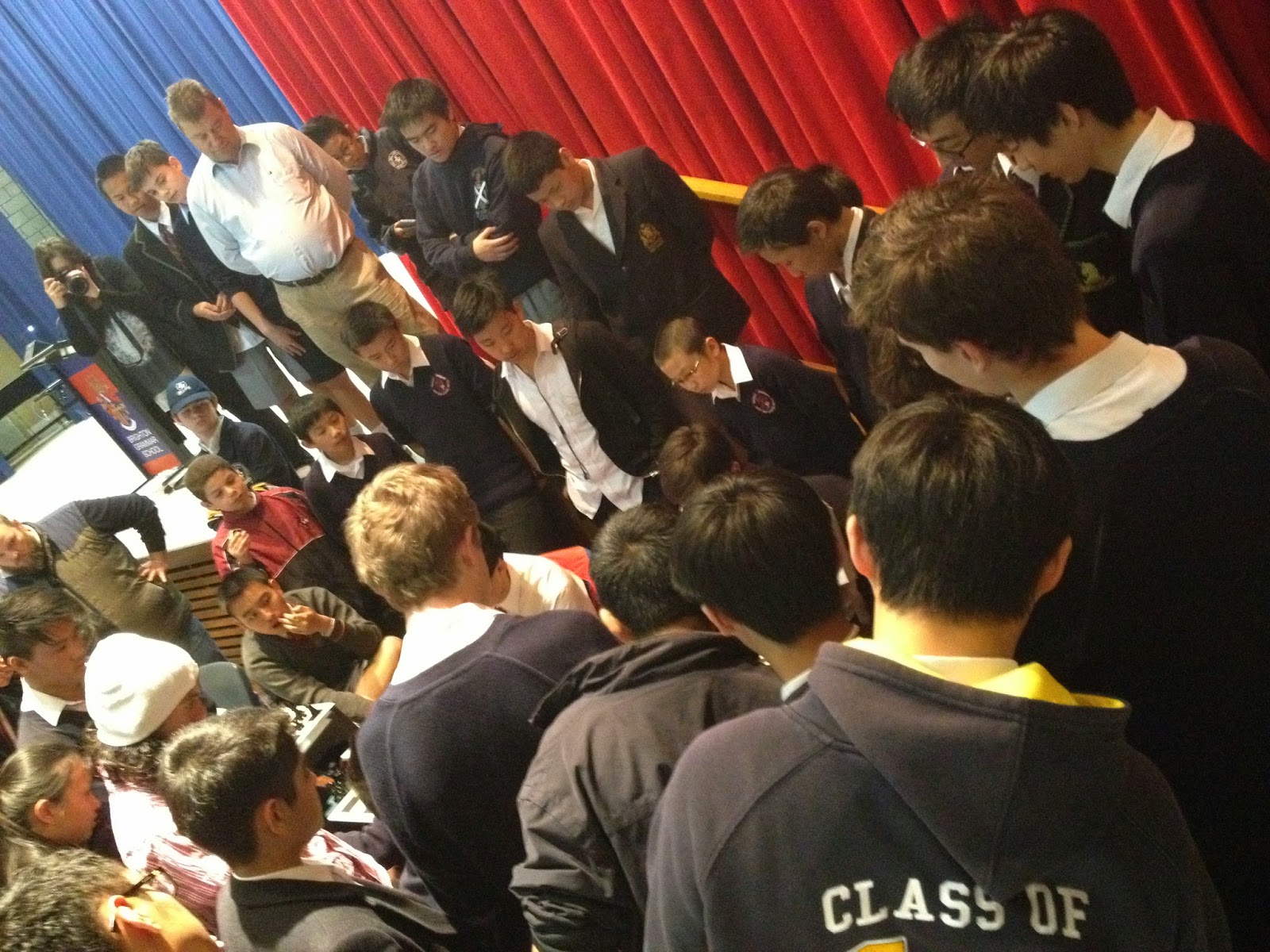 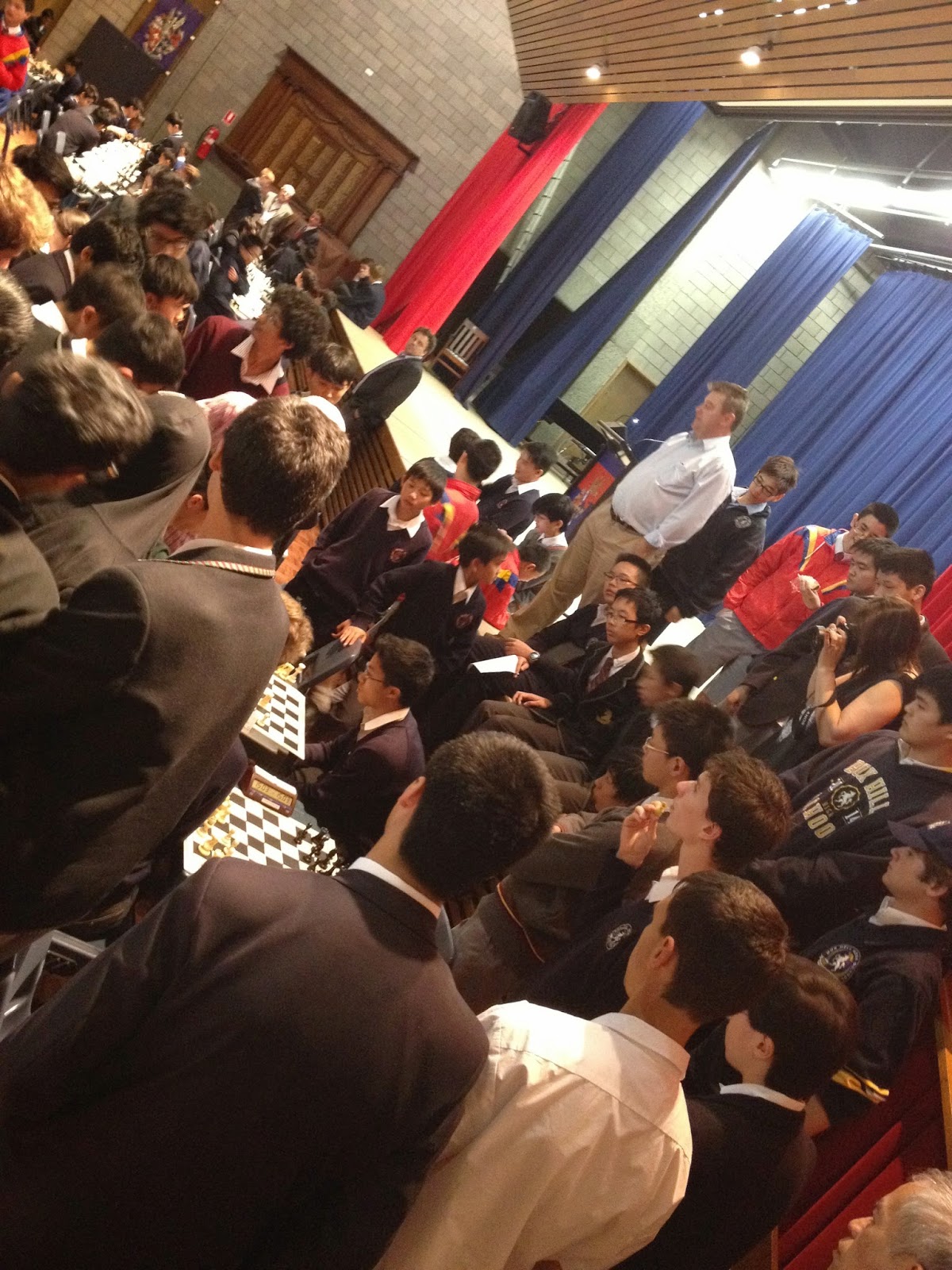 Photos from the Secondary Open final

The Girls finals, for both Secondary & Primary was held the next day at Lauriston Girls School. Mount View Primary took out the Primary girls division, with Cassandra Lim from Waverley Christian College being the only player to finish with 7/7. The Secondary Girls event was won by Presbyterian Ladies College, while there was a seven-way tie for first with Zhi Lin Guo from Balwyn High, Denise Lim from Billanook College, Alanna Chew Lee from Camberwell Girls, Grace Quah from MacRobertson Girls & May-Yi Foo, Vivienca Luong & Nidhi Wadhwa all from Presbyterian Ladies College all scoring 6/7 in the individual competition.
Full results are available on the Chess Victoria website. Primary Girls here, Secondary Girls here. 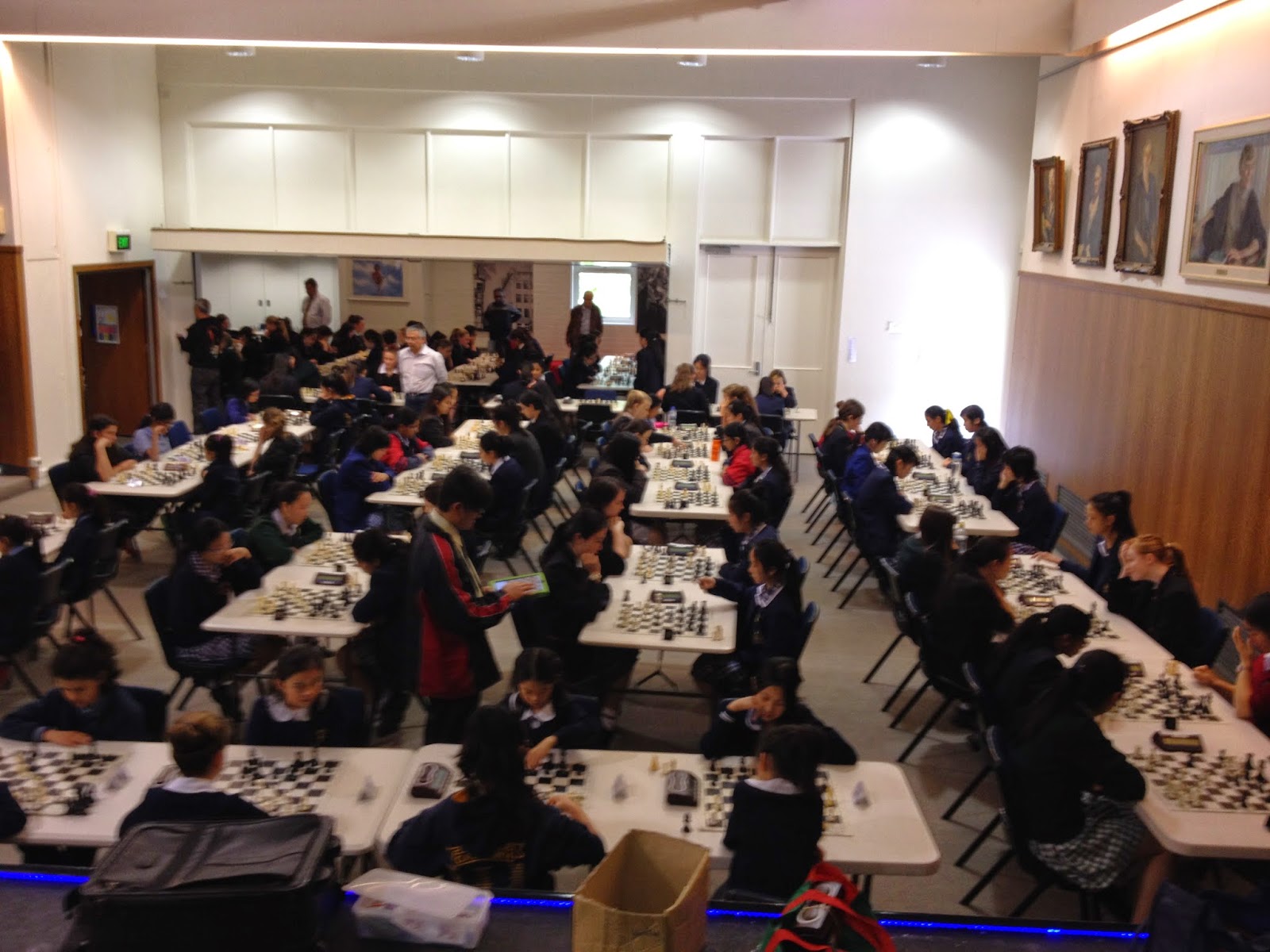 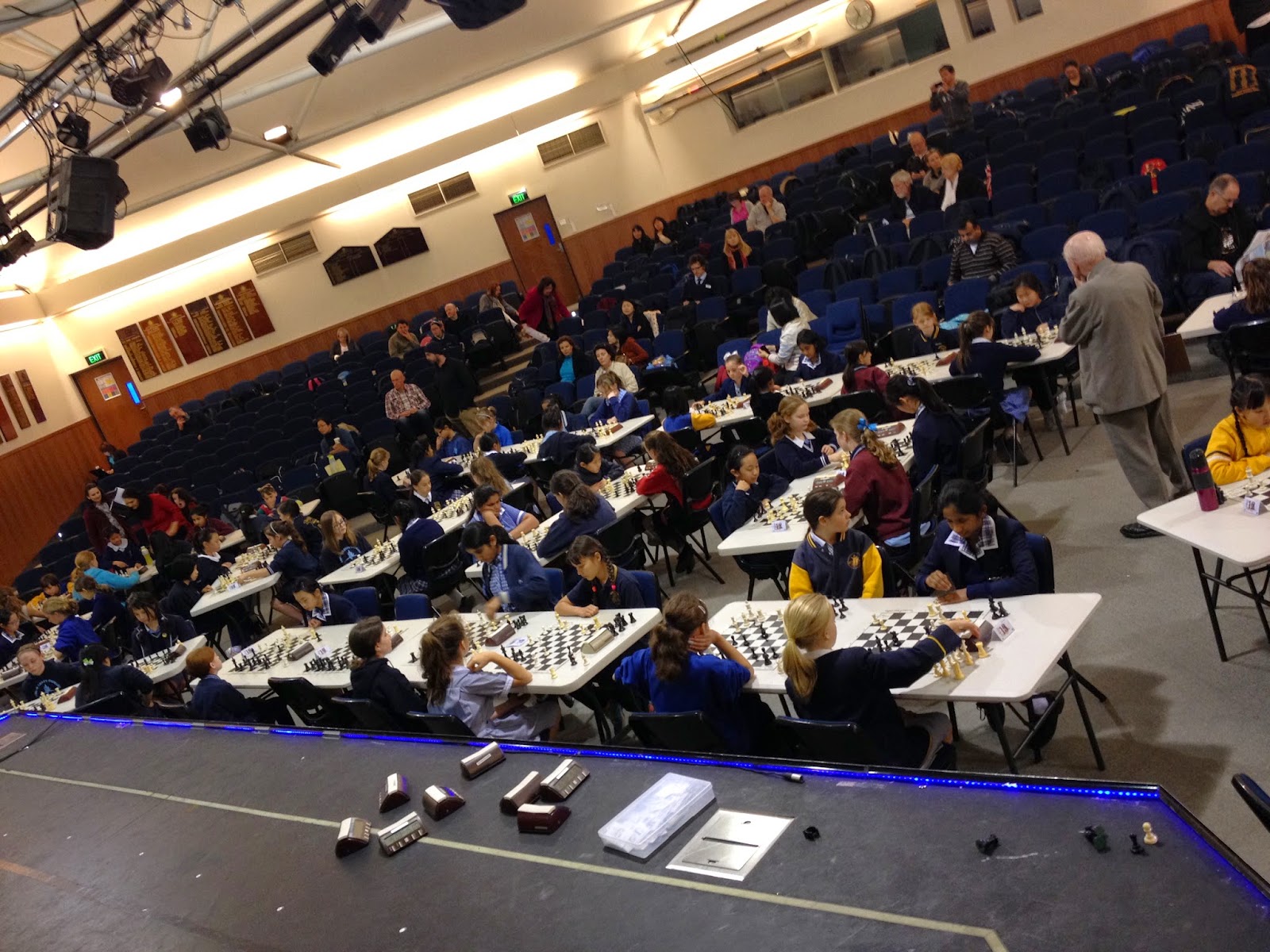 Photos from the Girls final 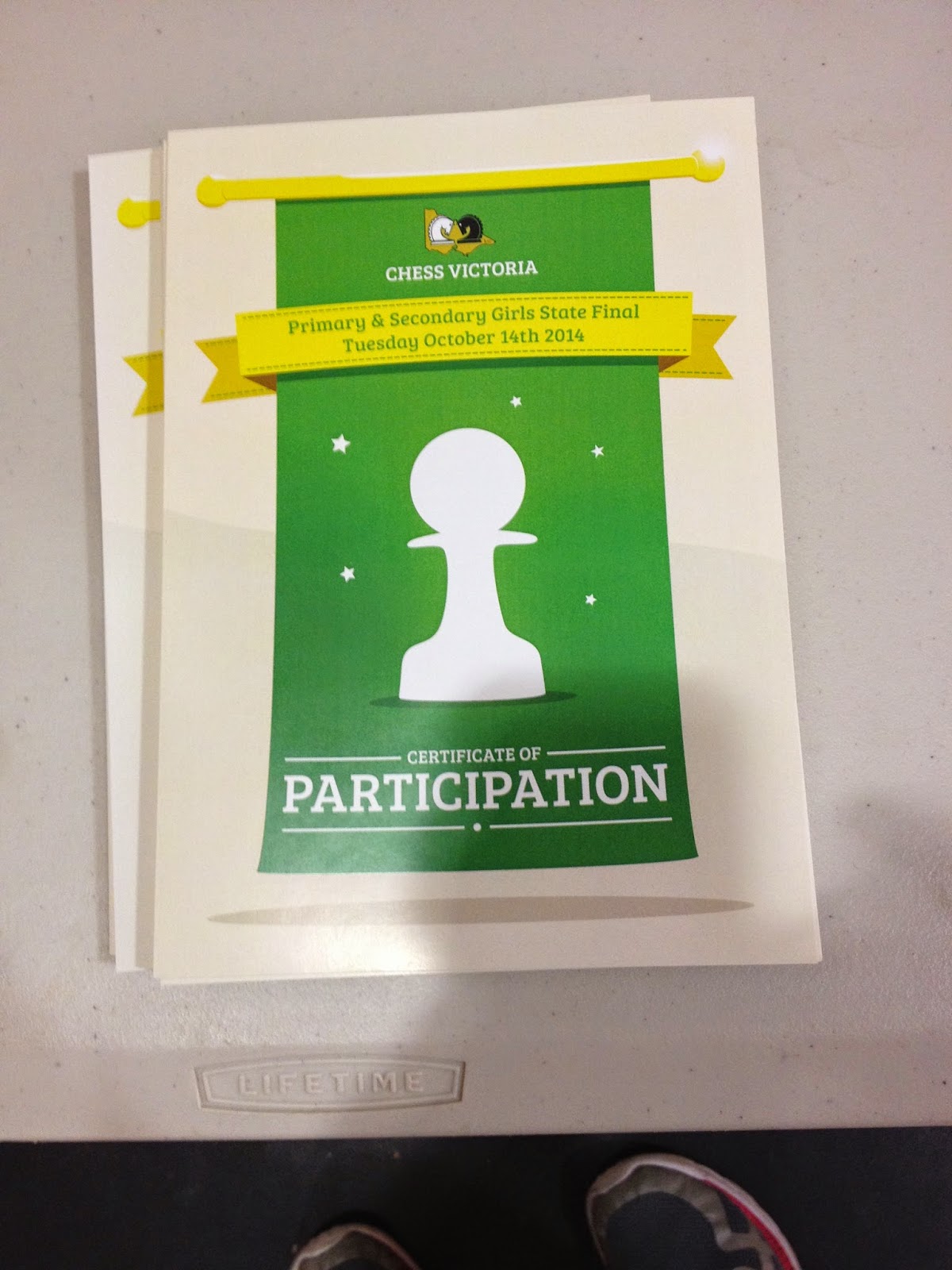 Participation Certificate given to all players at the Girls event

The Primary Open division is so big that the finals are split over four semi-finals, with the leading teams from each of these semi-finals meeting in a team against team format final a few weeks later.
The first semi-final was won by Wesley Elsternwick, with Jay Landau from Mount Scopus being the only player to finish on 7/7. The second semi-final was won by Deepdene Primary, with Daniel Roisman from St Kilda Primary the day's top scorer with 6.5/7. The third semi-final was won by Waverley Christian College, with siblings Cassandra & Christian Lim, both from Waverley Christian College finishing with 7/7. The final semi-final was won by Mount View Primary, with Leon Chen & Luis Chan, both from Mount View, finishing with 7/7.
The finals are to be played next week between the top 20 scoring schools from the four semi-finals. The winners of the semi-finals are the obvious favourites, but in a different format of school against school, the results could be a little different from early expectations.
Full results are on the Chess Victoria website.
Semi-final 1 (German Club Monday), Semi-final 2 (German Club Tuesday), Semi-final 3 (Glen Waverley Secondary Thursday), Semi-final 4 (Glen Waverley Secondary Friday). 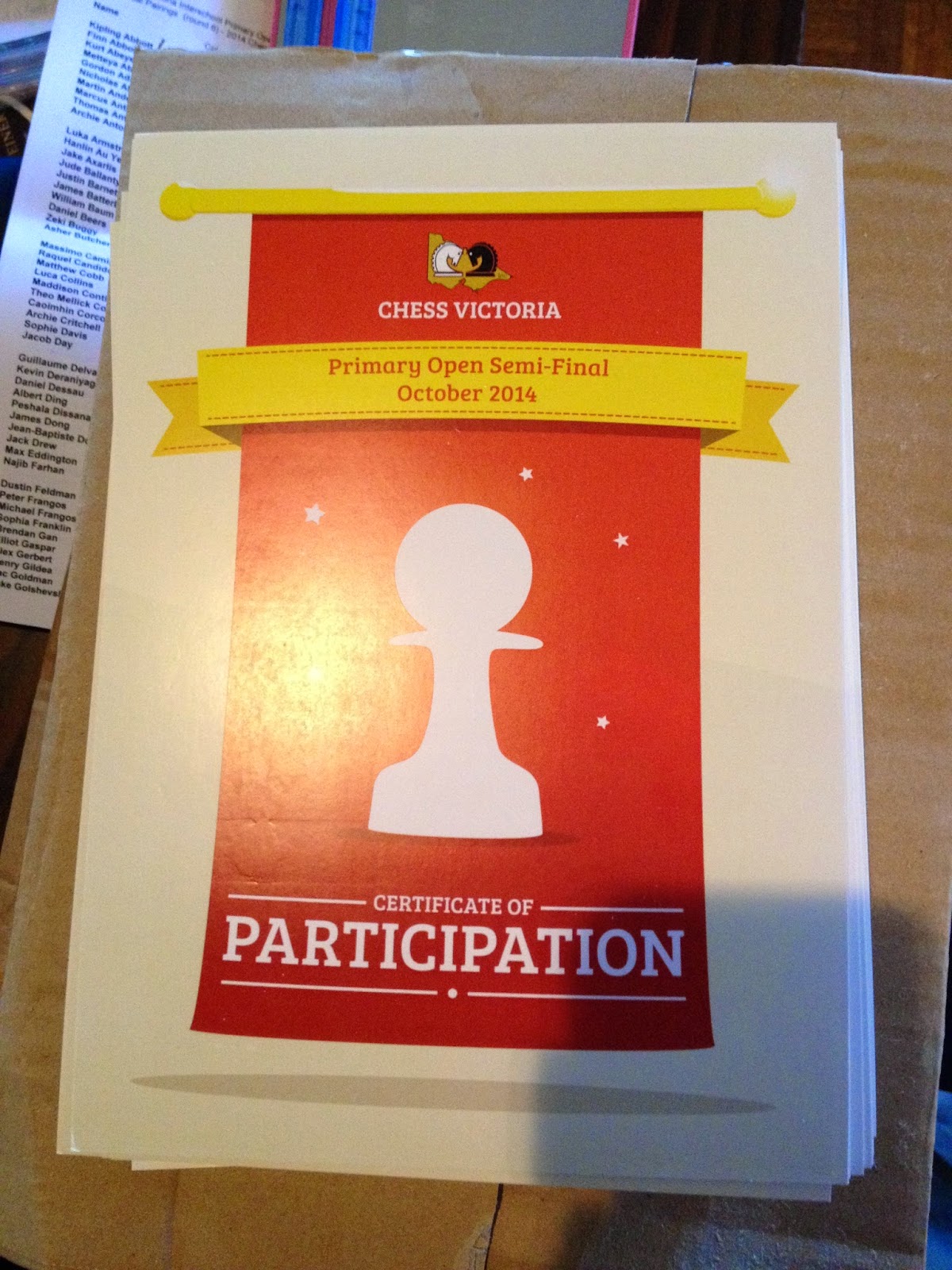 Participation certificates for all players in the Primary Open semi-finals 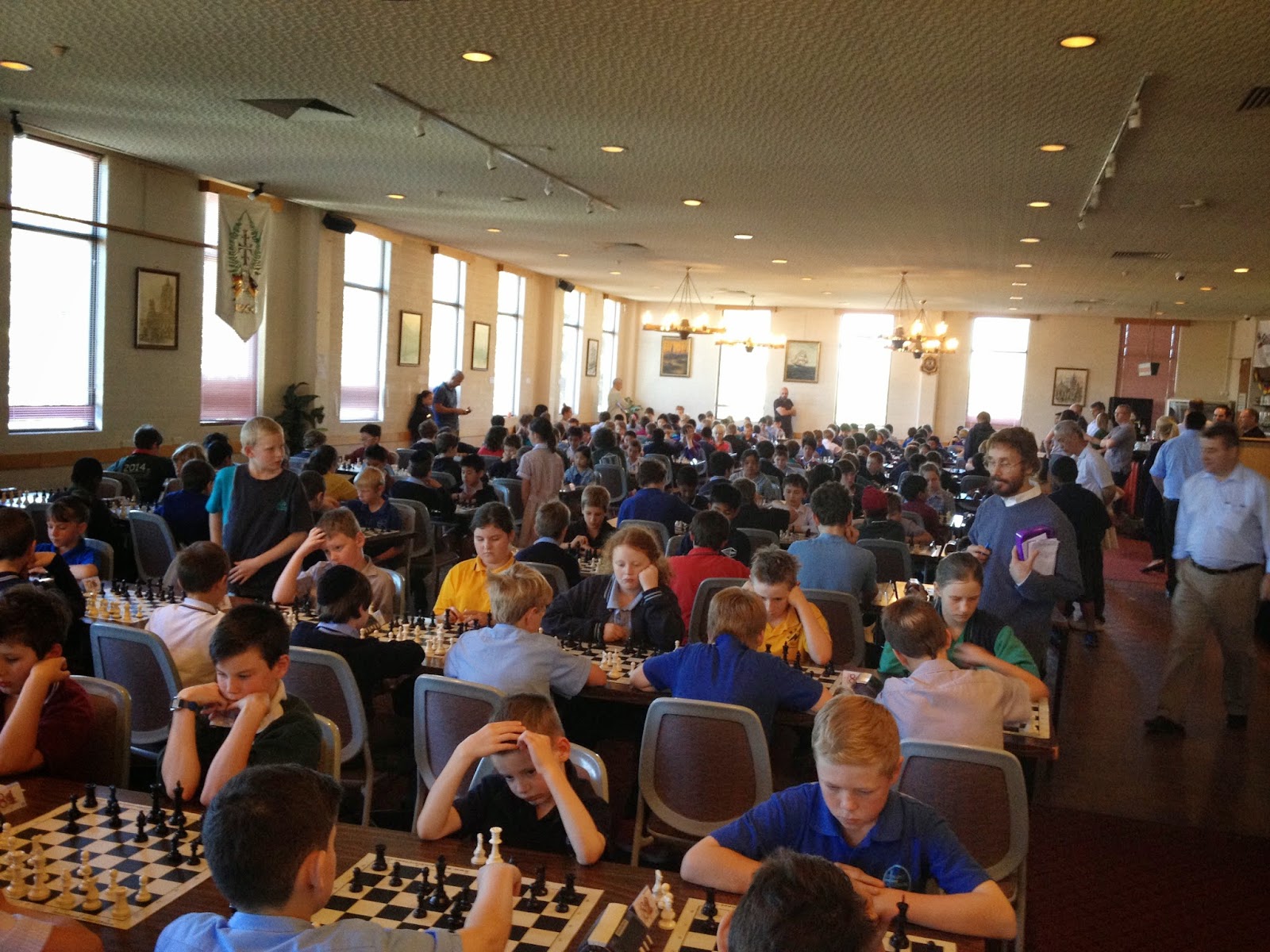 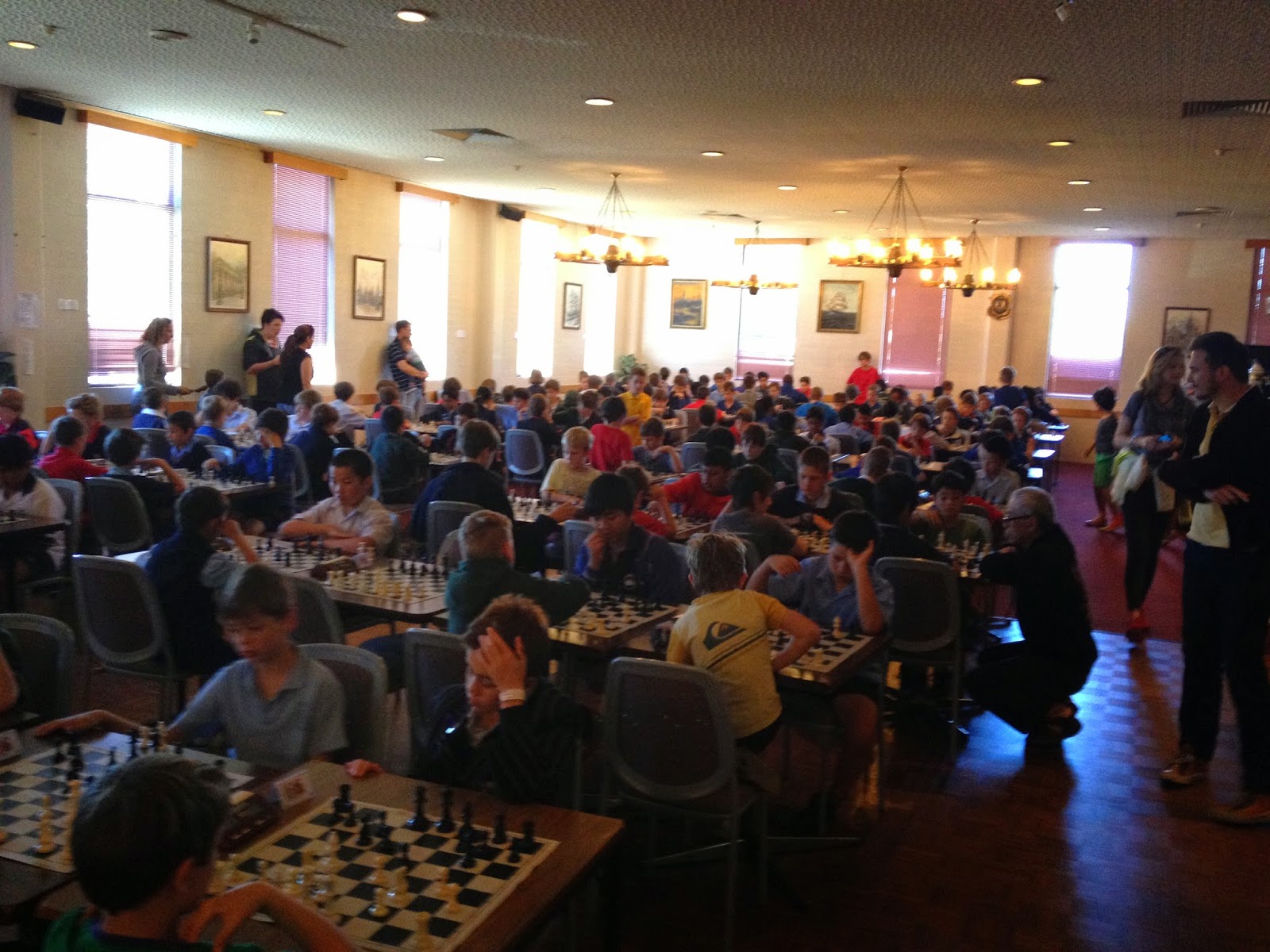 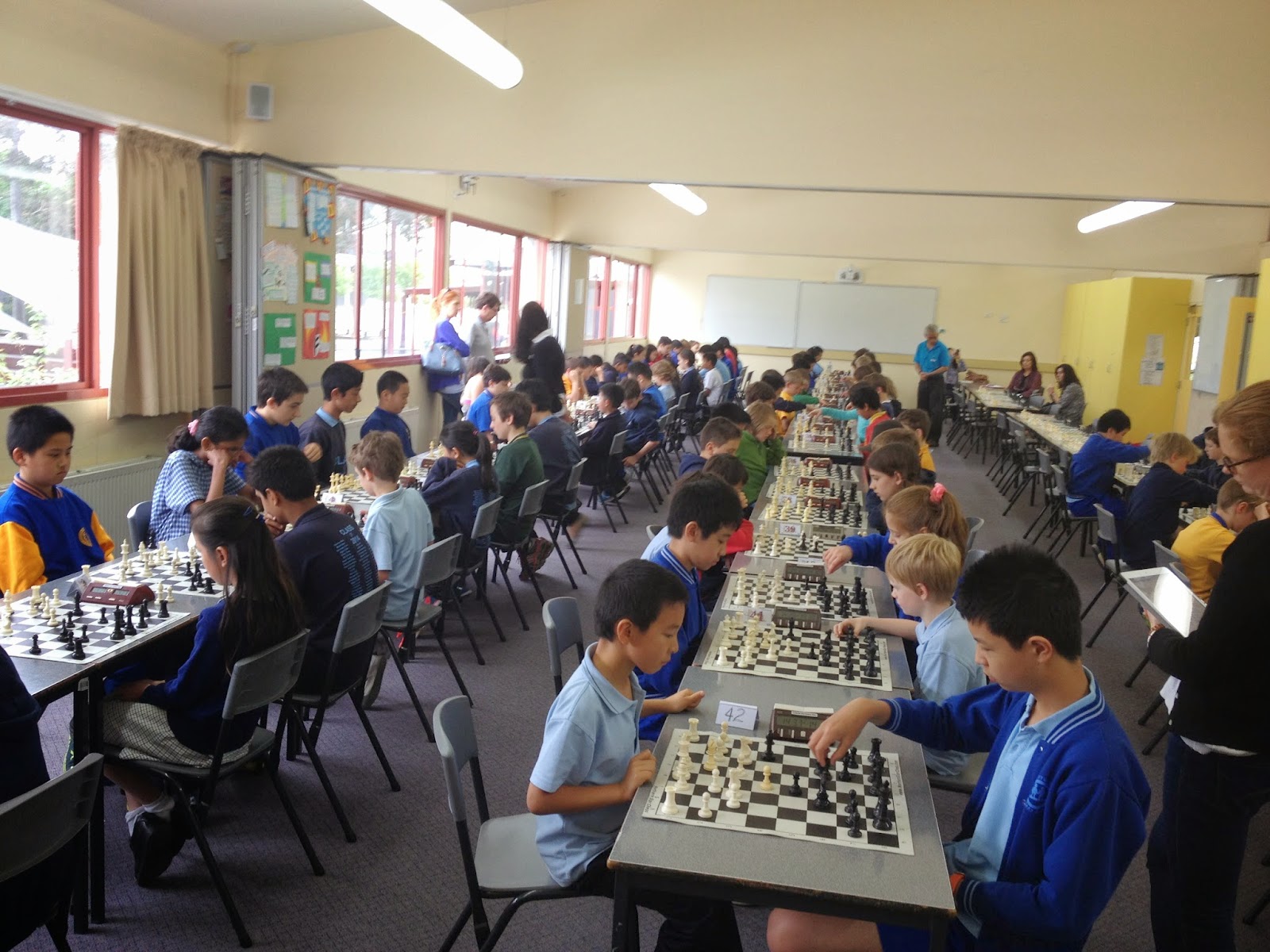 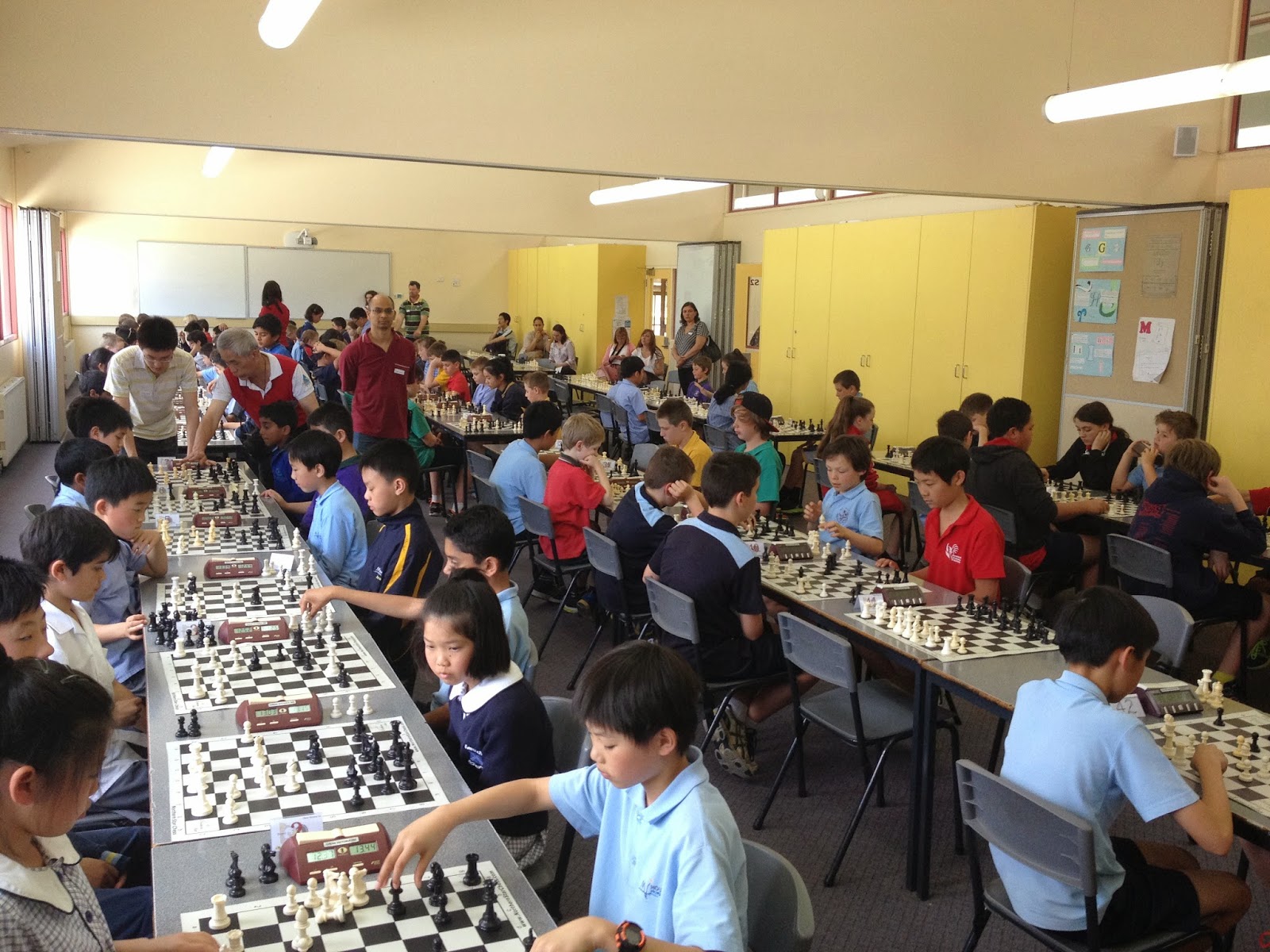 Thursday Semi-final
There are still two finals to be played - the Primary Open final, as well as the newly-created Prep-Year 3 Junior Open final.
﻿
Posted by MelbourneGamesCoach at 17:33