City of Melbourne Open - Round 2

On paper, round 2 seemed to be 'business as usual' for the top seeds in the City of Melbourne, however a closer look reveals that there was some luck & some extended games that were required for the top seeds to avoid losses this round.
Justin Penrose was the luckiest player this week, when in the following position his opponent, who had been playing on the 30 second increment for the previous 40 or so moves, blundered at the final hurdle before reaching a drawn position: 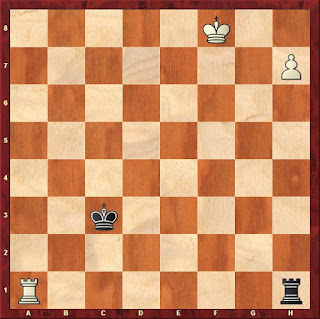 Here Rxh7 is a simple draw, with a King & Rook v King & Rook ending ... but the result is vastly different after Rxa1??
There were some upsets on the lower boards, with the McCart brothers enjoying a good evening, with both brothers recording wins against higher rated opponents.
As usual, full results can be found on ChessChat.
The game of the round this week sees David Beaumont disproving his own ideas about the Benko Gambit, showing that it is indeed a very playable opening & in spite of being a pawn down for a majority of the game. The exchanges only helped black's position & the weaknesses in white's pawn structure ultimately proved too difficult to defend, allowing black to crash through for the win.