The Northern Star Chess Squad continued for term 2 with another small but enthusiastic group of youngsters keen to learn about chess. This week we looked at perhaps the greatest chess player of all time, former world champion Garry Kasparov. Before looking at any of Kasparov's games, we looked at some of the reasons why he was the best chess player in his day. His main advantages compared to his competition were in terms of his preparation & his tactical ability. He used these advantages to great effect & was at one point in time the world's leading exponent of chess databases & software (and apparently still has a 'top of the line' database), which he used to gain advantageous positions out of the opening. His tactical ability then shone through in these positions as he found ways to win positions that others might only have been able to draw.

Although there are a number of games that demonstrate this fantastic ability of Kasparov's, his game against Veselin Topalov from the 1999 Wijk Aan Zee tournament is considered by many to be one of Kasparov's greatest & I though this would be a good game for the kids to look at to see how someone like Kasparov could calculate variations & turn an advantageous position into a win.

After looking at the Kasparov-Topalov game, the students played games against one another, which were once again very hard fought.

After a short break, we then looked at a position from the game Reti-Carls & discussed how to evaluate a position & the importance of planning. 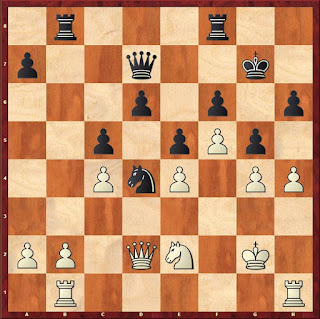 The main theme here is about building towards a breakthrough on the king side down the h-file, while also trying to keep pieces on the board. The space advantage that white has means that he can potentially line up three major pieces on the h-file before playing hxg5, while black can only line up two, making defense difficult. An additional factor with this game is that victory is only assured in the position when the white queen breaks through on the queen side, which leads to checkmate or a significant material advantage. The entire game is below, so you can see how Reti finally managed to win the position.

To finish off this week, we looked at a variety of positions & ways to defend against threats that are posed in a position. This week we focused on breaking pins, as pins are one of the most common tactics in chess. We also looked at how to exploit a pin in the following positions, as tactics are only useful if they can be employed effectively. One thing that seems to be a common theme in many games that children play is a focus only on their own tactical possibilities, often ignoring their opponent's threats. Once they are able to see both their own as well as their opponent's threats, their tactical play often improves, while more subtle ideas, such as prophylaxis, start to be employed in their games.

In the above position, black needs to find a way out of the pin on the e-file. Although there are a number of options for black to break the pin, only 1...Ne6 does so without losing more material. The above position is another example of a pin on the e-file. This time the bishop on e5 is pinned & the best way to break the pin is to remove the piece that is pinning the bishop with 1...Qxe2. Other options are not effective, mostly due to the idea of playing Rae1 & f4 to exploit the pin, although 1...Qe6 requires 2.Bc4 Qe7 to be played first.

The squad is a great learning environment for kids, as they are able to learn with others who share their passion & interest in chess. The small group sessions are generally more cost-effective than private coaching & the content and format offered is unique to Northern Star. If you are interested in having your child attend, please contact Pearl Yung at Northern Star Chess, or look on the squad webpage for more information.
Posted by MelbourneGamesCoach at 03:40