What would be your ideal chess club?
I decided to do a Google search of my local chess club the other day & discovered some interesting drawings of possible redevelopment plans & it got me thinking ... what would be part of an ideal chess club?
The plans in question were on the website of a German-based Architecture firm Kazanski Heilhacker

A view of the possible front of the club A view of the possible side of the club
Although the plans look like they could have potential, with the chess club likely on the lower floors, with possible apartments on the upper levels, it won't be going ahead like this.
Apparently the club can't be demolished completely due to Council heritage regulations, however plans are being investigated to basically rebuild the club, with the 150th anniversary in 2016 being an ideal date to unveil a new-look chess club!
This got me thinking ... what would an ideal chess club have?
As far as the Melbourne Chess Club are concerned, the former architecture student in me likes the look of the building above, although perhaps there is a little too much glass (and potentially problematic direct sunlight) for a chess club, not to mention possible vandalism issues given the area.
I think the club should be looking at a 3-storey building, if it is possible under council building regulations, with the top floor being dedicated to apartments (I would imagine you could fit 4 decent-sized units in the space) which would bring in some consistent income for the club (although there would also need to be some maintenance work done on them from time to time). The two lower floors could be dedicated to the chess club, with one floor being a large tournament hall, while the other floor could hold the bookshop, office, coaching area, casual blitz/analysis area, computers, etc.
In terms of other chess clubs, there are a few that stand out from around the world:
Largely in terms of its place in chess history, the Marshall Chess Club in New York stands out as a significant chess club, even if it is not perhaps the most modern facility to play chess. The various photos & items of memorabilia around the place would make for a very special atmosphere to play & it would definitely be a place to visit if I was ever in New York!

A view inside the playing hall, with historical photographs all over the walls﻿ Remarkably similar to this photo of Capablanca conducting a simul at the club in 1926!
This short video also shows some of the history of the club.
The Dubai Chess & Culture Club seems to be like many things in the oil fields of the Middle East, to be a grandiose, oversized homage to a particular facet of life - in this case a massive building dedicated to chess. It is a modern, spacious facility & seems to have pretty much whatever is required of a modern chess facility.

From the outside, a good looking building, with an obvious chess connection (which may or may not take away from the aesthetics of the building). While inside sees a spacious main playing hall, with other facilities alongside.
However the best chess club (at least from someone who has not visited the places above) seems to be clearly the Saint Louis Chess Club & Scholastic Center in St Louis Missouri. Not only is it a modern building, it has a number of areas such as a main playing hall, areas for analysis & commentary, as well as a shop & many other features. 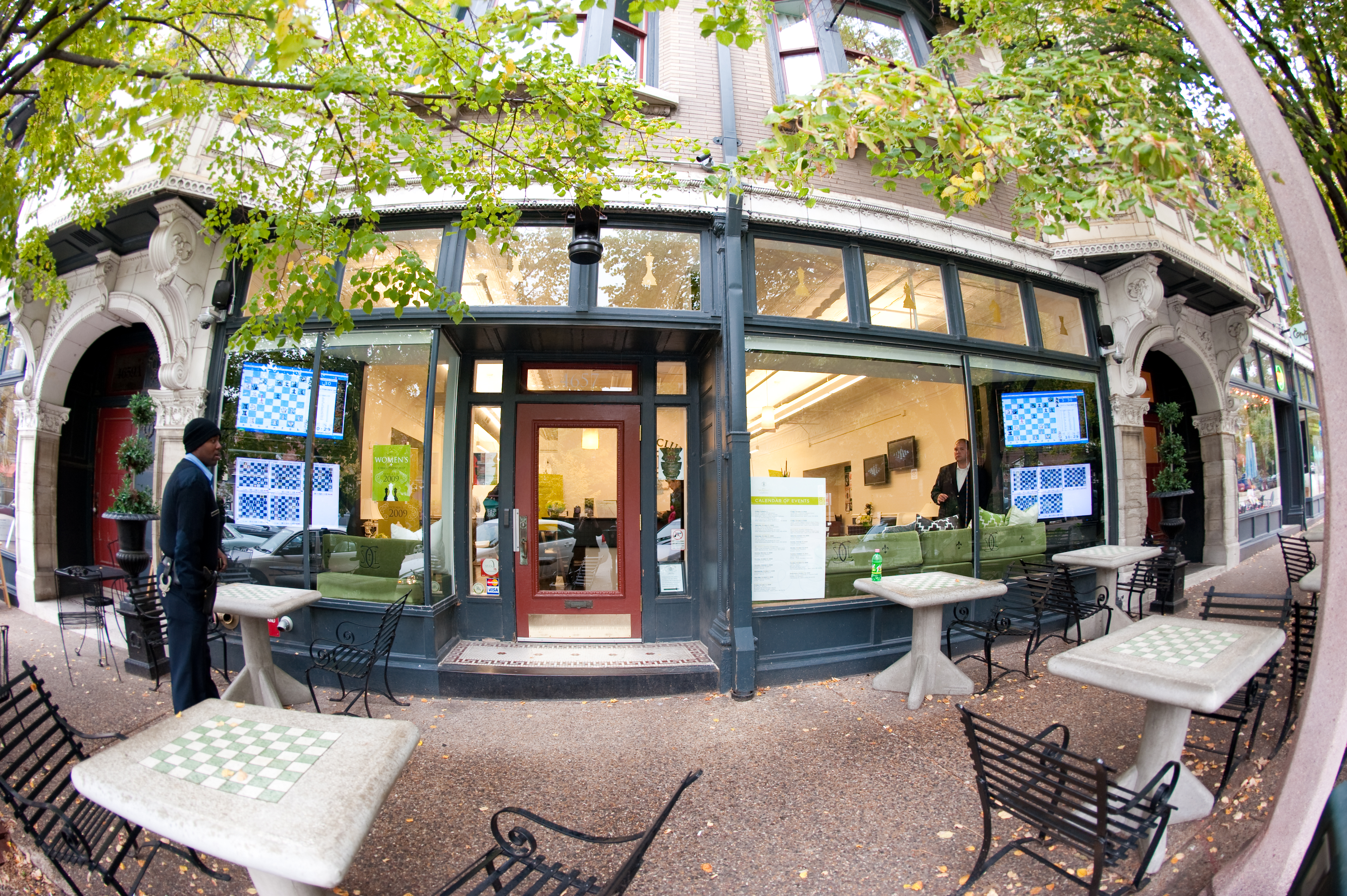 From the outside a bright, modern building with outside tables that can be used if the weather is suitable.

Inside an inviting reception desk 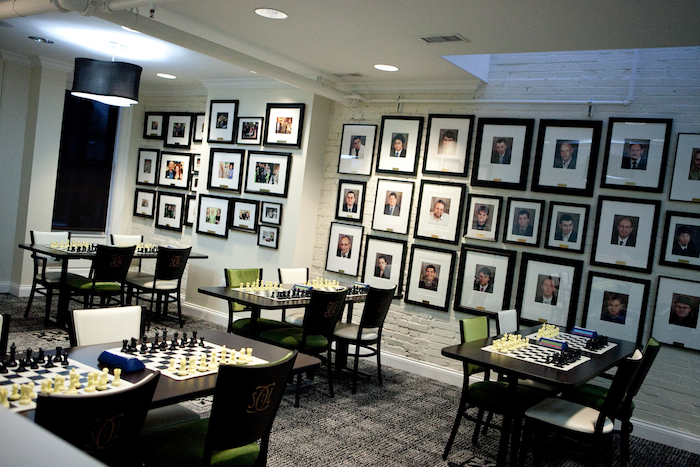 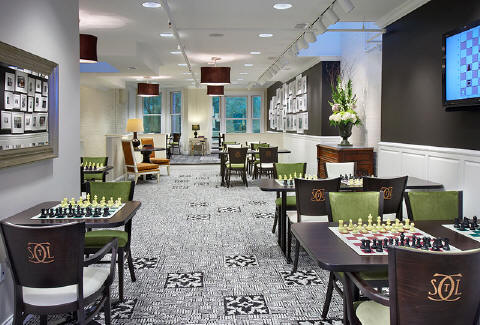 Another view of the tournament area, with TV screens to provide coverage of major events 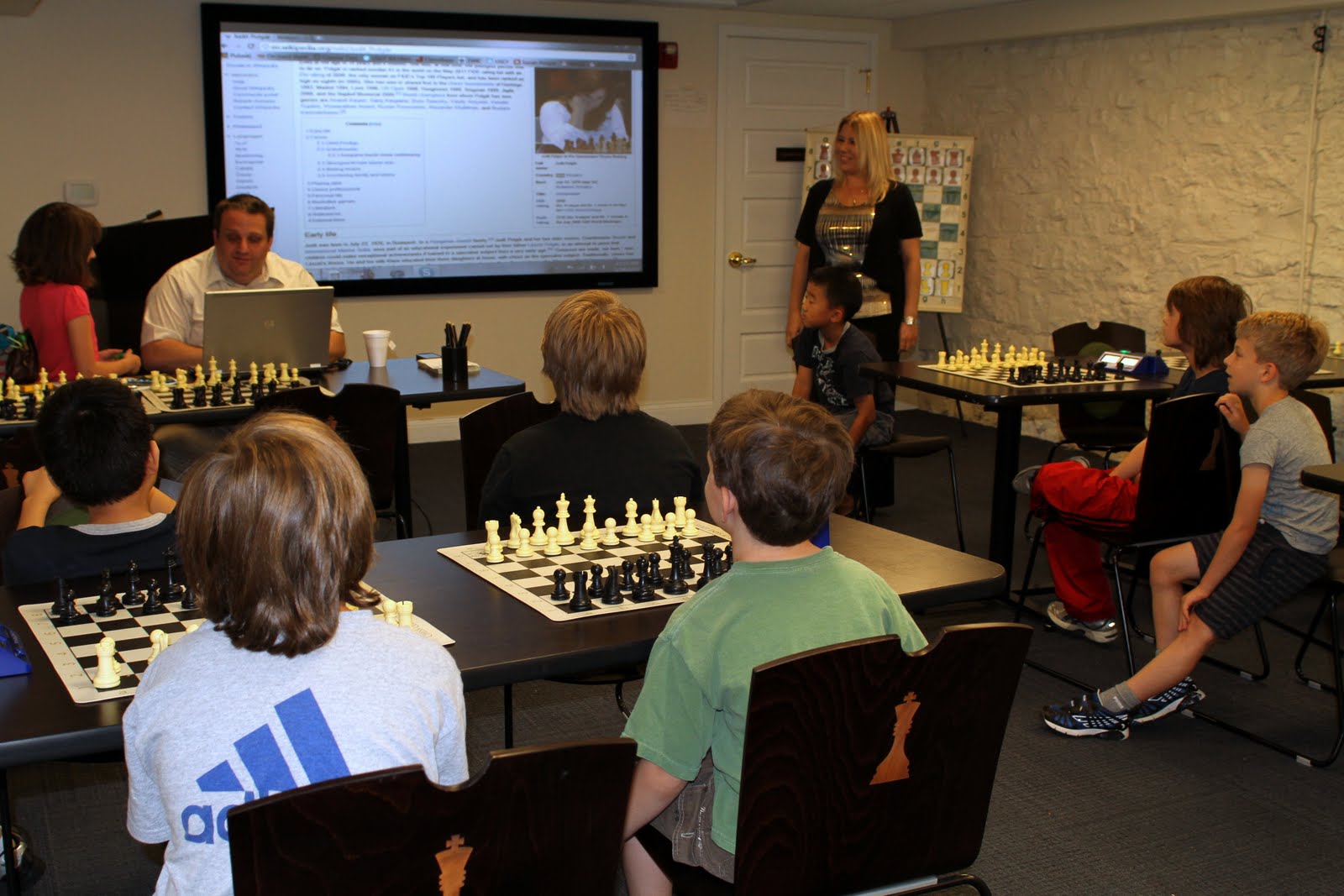 An area for coaching, commentary & analysis 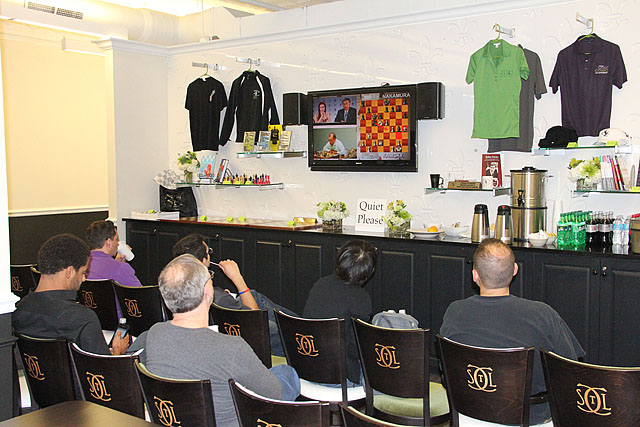 A shop with another TV screen for coverage of major events

Across the road from the chess club is the World Chess Hall of Fame, in case the club itself wasn't enough to satisfy your chess fix!
What would be in your ideal chess club?
﻿
Posted by MelbourneGamesCoach at 08:18